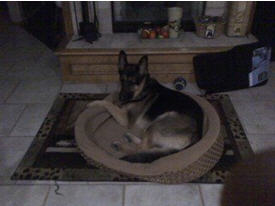 We renamed Damoo MoJo and we call him Mo.  We discovered he had an almost complete hearing loss, so it explained a lot of his behaviors.  We LOVE him so much and he LOVES us so much.  He is so grateful to have so much, and we are so happy to provide it all for him. He is our friend, our protector and feels like he has been with us forever.  He is king of the household, no longer confined to a crate at all, and has no accidents or mishaps whatsoever since being with us.  We still take certian precautions with him around other people, but have not been disappointed in him for any reason.  He is spoiled rotten and has a great life. I only wish I could provide for so many more.  Mo is a blessing and we love having him. He is in his forever home, with his forever bed and we wouldn't trade him for anything! 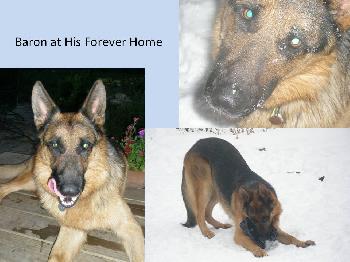 When MOGS inquired as to how Baron was doing in his new home we received the following response from his forever family:

We are so enjoying Baron!!  When I saw him on the website for adoption, I thought this might just be our dog.  We went to meet him and he was HUGE! And also kind of crazy.  He had had no training and had a lot of built up kennel aggression. I was a little hesitant at first so we didn't decide for sure at the first Meet & Greet, but then I thought about it and called Lori later in the week to let her know we for sure wanted him in case anyone else was looking at him. We wanted first dibs!  She called me back and was very forthright about how untrained he was and needed a lot of work.  The only background information we had was what was on the website.  He was found wandering rural Missouri and sent to a high kill shelter where no one claimed him.  How could no one claim him! He's gorgeous!!  We could also tell no one had trained him or been very kind to him.

He warmed right up to us!  Yes, he's had some challenging moments, but he is such a lover!  He's great in the house, he comes when called, and he doesn't chew anything up.  He and our other dog have become best buds and Baron loves to chase her relentlessly in the backyard.  He does what we call 'The Baron Collapse' where you'll start petting him and he just collapses into your legs and rolls to the floor onto his back and enjoys his belly rub.  We are still working with him and his ‘attitude’ towards other dogs but he has come so far from when we first adopted him.  I call him the gentle giant; he is great with people-no aggression at all!  He has built up so much muscle and put on that extra weight he needed from all of our walks and continued exercise.

These dogs are so lucky to have an organization like yours to give them hope and a second chance!

I plan to volunteer with MOGS after this fall. 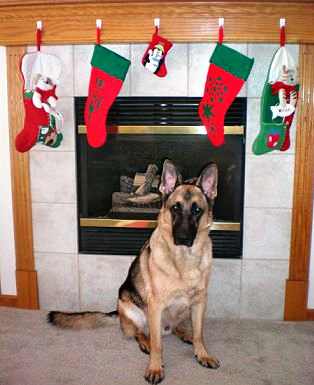 MOGS note: Pete came from a high kill pound that called him aggressive and unpredictable.  Nothing could be further from the truth.  He was simply terrified.

Pete's forever family comments: Pete is big goofball love of a boy who is great with dogs, cats and humans and is celebrating his first Christmas in his forever home.

His story is a story of hope for the thousands of dogs like him in pounds who are misunderstood and condemned to die because of it. 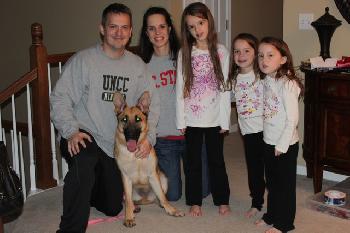 MOGS note: Jojo came from a Nebraska shelter where the staff were afraid of her because she didn't like going into her kennel and "mouthed" them.  She was about to die for that reason alone.  LOOK AT HER NOW.

Jojo's new family commented: Jojo is a wonderful dog. She absolutely loves it here! She's great with our kids (5 year old twins and a 7 year old -- all girls) and is a super fun ball-dog -- she'll play fetch for hours on end!   She had a brief spell with submissive urination (not an everyday occurrence, but enough to be a nuisance), but that stopped after about 10 days. We're taking obedience lessons (although she already knew quite a bit) and she's learned not to jump on people when she gets excited.  She keeps barking to get me up at 5:00 am--it would be nice if she would wait until at least 6:00!   In all, she's a great dog and we're lucky to have her.   Bobby and Adrienne 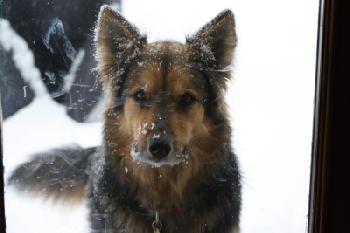