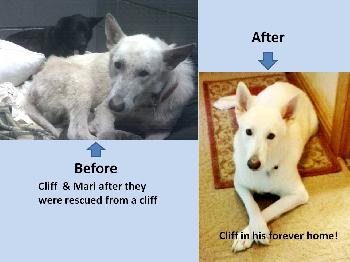 On January 22, 2011 MOGS President Nancy Campbell spent four VERY cold and wet hours on a cliff in Kansas City, rescuing two dogs. It wasn't her first time to rescue a dog (more like her hundredth) so she knew it took patience and time to build trust with the dogs.Â The main problem was that there had just been a snowstorm that dumped 10" of snow and ice -- and the dogs were living in an old broken-down shed at the bottom of a cliff.

The two dogs had been roaming stray in the area for 6-12 months and had become bonded. But until the very cold and snowy weather hit, neighbors just tried to feed them hoping they'd survive. By the time we arrived, white GSD "Cliff" was unable to walk or fend for himself. The smaller shepherd mix, Mari, was still a decent weight, but Cliff was starved to the point where he couldn't walk. A kind neighbor was leaving food for them and called MOGS. Both dogs put up as much fight as they could, which was considerable. Ultimately both had to be manually lifted and carried up the cliff. A scary moment happened when the rope holding Cliff nearly broke and he dropped about 10 feet! Thanks to a strong neighbor, we quickly got Cliff back up and safely into the van. Cliff was heartworm positive, had extreme fur loss and was infested with fleas. He was in such terrible shape that at first we thought he was 10-12 yrs old -- but in truth he was only 2-3 yrs old! He started gaining weight while in boarding and was put on heartworm medications. After months in boarding, Cliff's journey is over - he now has a wonderful HOME with a doggie sister in southern Illinois!

Mari, his companion, stayed in boarding long after Cliff was adopted. She was still semi-feral and had little interest from adopters. But she too, finally found a home with a loving local family and a doggie sibling! Both Cliff and Mari came a long way, their journey ending in loving, warm, safe, happy homes! 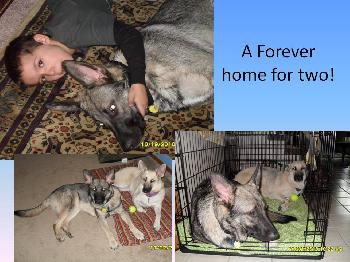 Last year MOGS received a call from the Humane Society that they had a GSD with serious back leg / hip trouble even though he was only a year or so old.  He had a hard time walking straight, etc.  Their vet said he had a luxated patella.  Turns out it was nothing of the sort.  He was suffering from  malnutrition and needed time, great nutrition, exercise, etc. to heal.  That GSD along with another have found their forever home at the Claassen’s.  Recently the family sent MOGS the following update on Sofie & Ziggy(known as Roxie & Cannon while in the MOGS program).

Sofie came to us in May and is an amazing dog.  She follows me everywhere and follows all commands. To this day I cannot understand why someone would not keep her.  Lucky for us that they didn't.  Ziggy came to us in October, we fostered him for less than a week and decided to keep him. He had some difficulty walking at that time and was so quiet that we couldn't let him get away.  How things have changed!  He has turned into quite the "puppy".  Things (crate blankets, shoes, leashes, earphones and anything else you can think of) started moving around the house and being placed in strange places.  I did blame the children at first but turns out that Mr. Ziggy is responsible for all of the strange disappearances.  Luckily, he does not chew any of these objects, just likes to move things around (interior decorator?).  Sofie enjoys the company, although as you can see on the picture, Ziggy likes to follow Sofie into a crate which she does not appreciate.  They do play well together and love to be out in the backyard chasing each other.  The only problem between the two of them occurs in the snow.  Ziggy does not like to share "his" snowballs with Sofie but she can take anything else from him, even food.  Ian, our youngest, is Ziggy's best friend and fortunately Ziggy tolerates him very well.  They can be seen in the exact position on the picture many times per day.  They have become a wonderful part of our family and we can't imagine life without them.  The Claassen Family

An update on Copper, now "Cora." Cora is just the best dog EVER! She gets along very well with the three cats. One of the cats tries to bait her all the time by flagrantly batting toys right in front of her, but Cora is pretty good about not chasing. She enjoys the benefits of being around the horses because she enjoys chewing on horse hoof trimmings and the occasional bite of manure. She is the best house dog that I've probably ever had. She has not had ONE accident, not even one! She has her own bed in my home office. Sometimes I will miss her in the living room and she'll be in the office on her bed. I think after the kennel stay that she enjoys "a room of her own," quoting Virginia Wolf. I found my little calico cat snuggled with Cora about three weeks ago on Cora's bed. She and my Australian Shepherd are good friends. They like to run and play with each other. If he is outside and she isn't, then she'll whine at the back door until he's back in. Cora is known as the Fort Hays State University Sociology & Social Work Department's "Recruiting Dog" because she'll ride with me in the car's backseat when I go to student recruiting programs. I take Cora with me when I visit friends in Missouri, on university recruiting trips, and when I went Christmas shopping in Nebraska. So since November, from Hays, Kansas Cora has travelled to Columbia, Missouri twice; been to Holdrege and Kearney, Nebraska; and in Kansas, Cora has been to Great Bend, Salina, and Colby. My friend (a retired MU Mathematics professor) in Columbia says that of all his house guests that Cora is by far one of the best well-behaved and is welcome to visit anytime. Also, when that particular friend was in Rusk Physical Rehabilitation Center in Columbia, Cora visited him after knee surgery under their "Visiting Pet Policy." She plunked herself down next to his I.V. stand as though she did this every day. So Cora and I are doing very well together. Tomorrow, her pictures with an FHSU handkerchief with the tiger mascot around her neck will be framed and hung on the FHSU Sociology Department Conference Room at the request of the former department chair. My only concern is that Cora's promotion file might be thicker than my own! Kate and Cora